Starting with very little capital but a large entrepreneurial spirit, The Blackburn Group was founded in 2006 with a burning desire to make a difference. Since 2006, The Blackburn Group has grown to a diverse group of businesses across the United States with over $250 million in annual revenue and more than 150 team members across 7 operating companies. 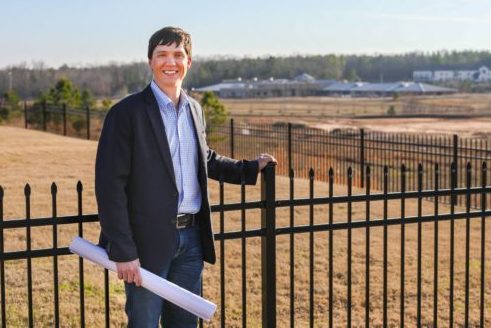 The Blackburn Group has returned significantly on its endeavor to create long-term capital appreciation for its partners by maximizing each company’s potential and building strong and lasting relationships along the way.

After graduation, David joined Deloitte & Touche in Nashville, TN before getting into the commercial real estate development business through the formation of his company, The Blackburn Group. The Blackburn Group has been named one of Inc. 500’s Fastest Growing Private Businesses in America for five years in a row and the #1 Fastest Growing Company in the State of Mississippi. In 2018, David was recognized as one of the Top CEOs of Mississippi and Top 50 under 40 by the Mississippi Business Journal. David resides in Oxford, MS with his wife, Karen, and their two sons, Collins and Niles.

In 2002, David Blackburn took over the management of High Point Mitigation Company, LLC, a land mitigation bank in Louisiana consisting of over 1,600 acres of land put under conservation. In 2002, Blackburn also co-managed the renovation of a 96-unit apartment community, Jackson Square, into second home condominiums for Ole Miss alumni.

In 2003, David Blackburn was asked to take over management of an existing mechanical construction and service company, Upchurch Services, LLC, increasing profitability and then selling the company in 2006 In 2003, Blackburn also formed ABC Security, LLC, a marketing and sales firm that worked with Security Check to serve retail tenants in the check collection industry. . From 2003 to the sale of the company in 2007, Blackburn was able to help this company grow exponentially with clients throughout the United States.

Blackburn also formed UP Properties, LLC, in 2003 to develop a commercial land and office park located in Oxford, MS.

Blackburn’s first residential community, the Oaks at Wildwood, breaks ground in Georgetown, TX. The Oaks at Wildwood is an 86-home active adult community that received the Community of the Year award for the Austin, TX metro area for 2009 and 2010.

Blackburn Communities was formed to focus on the development of residential communities in the Southern United States. It has expanded over the years to become one of the premier homebuilders in Texas and Mississippi.

In 2010, Blackburn co-founded Rowan Oak Funds and serves as its President. Rowan Oak Funds is a private equity firm specializing in niche real estate, health, and fitness opportunities throughout the Southern United States.

Blackburn also purchased and completed renovations of 54 units at Oxford Square Townhomes in Oxford, MS that had been foreclosed on.

Blackburn begins its first single tenant development with a National retail tenant. This experience leads to Blackburn expanding to developing Dollar Generals in 2015 and the formation of Streamline Development in 2018.

In 2011, Blackburn also purchased and completed renovations of 30 units at the Park Condominiums in Oxford, MS that had been foreclosed on. These units were sold in 2016.

In 2012, Blackburn took over the Oxford Commons development, a 500+ acre master planned community in Oxford, MS which has since expanded to include an additional 120+ acres.

Development begins on the Preserve at Mayfield Ranch, a 159 home community in Round Rock, TX.

Development begins on The Park at Oxford Commons, a 92,500 square foot office park within the Oxford Commons master planned community.

Hays Junction Apartments breaks ground in Kyle, TX on phase 1 which consists of 207 units. This is expanded to 309 units with phase 2 in 2017.

Gin on Russell, a 64 unit condominium community in downtown Starkville, MS, begins construction with all units pre-sold in the first phase.

Blackburn Homes expands its operations in Texas with the start of two new communities, the Gardens at Mayfield in Leander and Diamond Oaks in Round Rock.

Blackburn Communities expands with the addition of Trails at Blackhawk, a 59 home gated community in Pflugerville, TX.

Streamline Development is formed to focus on serving the existing National retail clients for Blackburn and to expand into additional markets.

The Terrace at Oxford Commons, a 16,000 square foot retail center in the Oxford Commons master planned community, breaks ground and is 100% pre-leased.

Blackburn Communities expands its operations to Colorado with the start of Polaris Junction, a 301-unit apartment community in Colorado Springs.

Phase I of Brooks Ranch, a single-family community with 138 homes on 50' and 60' lots in Kyle, TX, a suburb of Austin, breaks ground.

The Retreat at Hero Way, a single-family community in Leander, TX with 84 homes on 28' lots and 1.4 acres of commercial land, breaks ground.

The Heights at San Gabriel, a single-family community in Georgetown, TX with 266 homes on 28' to 70' lots, breaks ground.